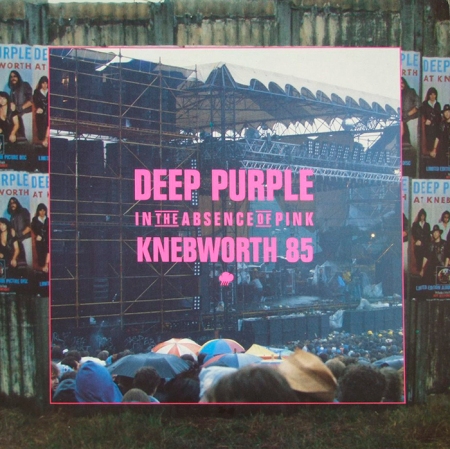 This was quite a weird job; a double live vinyl album from the band’s first concert in Britain in 12 years, having reformed just the year before. Like the rest of the huge crowd (they reckon 70,000) I’d also gone along and had to endure terrible weather throughout this open-air event. And to me preparing the cover it seemed only right to at least a nod that at the heart of the sleeve. The job was for Connoisseur Records in London, a busy reissue label who had done some serious business with their pioneering compilations (and gone gold with an unlikely Barry White 2LP set). I suggested they try getting the rights to this 1985 performance from the BBC who had recorded and broadcast most of it on Radio 1 as part of a joint promotion with the organisers. To my surprise the band’s manager agreed but frustratingly even though it was only five years on, the BBC had already erased or lost a couple of songs. One had to be restored using a bootleg source!

But the cover was great fun to do. I had taken my own camera along but the conditions were so awful I didn’t want to risk wandering off to get a few snaps, but did take a few of the arena in the mist and murk, and posters on the hoardings, from our vantage point. Rather than any close up live pics, these more atmospheric images formed the front cover, and the title came from one of singer Ian Gillan’s jokey asides during the set. A weather symbol for heavy rain completed the design! The back was similar but I then inset a few live pictures taken by a press photographer (himself working in grim conditions by the looks of it). Again there was a great shot of the guitar player Ritchie Blackmore backstage in wellington boots with an umbrella which also nodded to the weather. It appeared in Radio Times so I tracked the rights down and added that as a cut out. The show ticket I photocopied and crumpled up to simulate the state most of them had ended up in, then rephotographed it.

Inside, the gatefold gave room for a panoramic shot of the group and crowd towards the climax of their set, plus some more live shots of the musicians. The idea was to have an overcast feel for the outside and then a burst of colour when you opened the sleeve up. Round the big live shot I spread two layers of cuttings and headlines about the show, using black for the top layer so these could be read. I like to sneak in little snippets and one was a small shot of one of my friends who’d gone to the show with us sat under a tree on a hay bale in the rain, you’ll have to see the sleeve itself to get the joke.  All the artwork was still being done on board and then the final job was put together from this at a reprographic house using overlays I prepared for them (I will have a hunt in the attic as I may have got this back from the label). Some test prints were then sent up for me to check along with white label vinyl test presses. 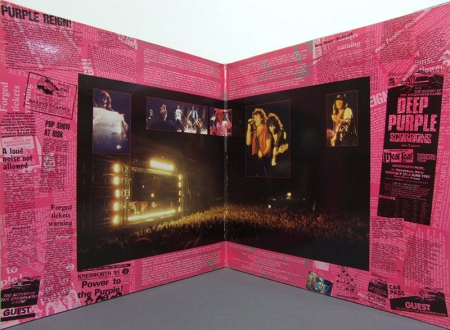 As the label were fairly laid back about artwork I did have quite a bit of leeway with special colours so took a bit of a flyer and specified a dayglo pink for the lettering on the front, and do remember getting gently told off when they got the final print bill in and saw how much extra it had cost! But it did look good. They did however baulk at adding picture inner bags so these were standard white, and the labels had to comply with their regular layout.

Difficult as it may seem, for the label vinyl was the major format, with a CD a bit of an also ran. However they did agree to we doing this as a fold out inlay so we got most of the material from the album onto it and also added an extra shot of Blackmore in his waterproofs. At this time the industry had a standard twin CD thick case so the rest of the design needed to work for that. I don’t recall the exact details but there turned out to be a pressing flaw on the first CD run, so it was redone. The first run had pink and black labels, the rerun just black. They also dropped the special pink on the second vinyl pressing to save money!

Easy On The Eye sites